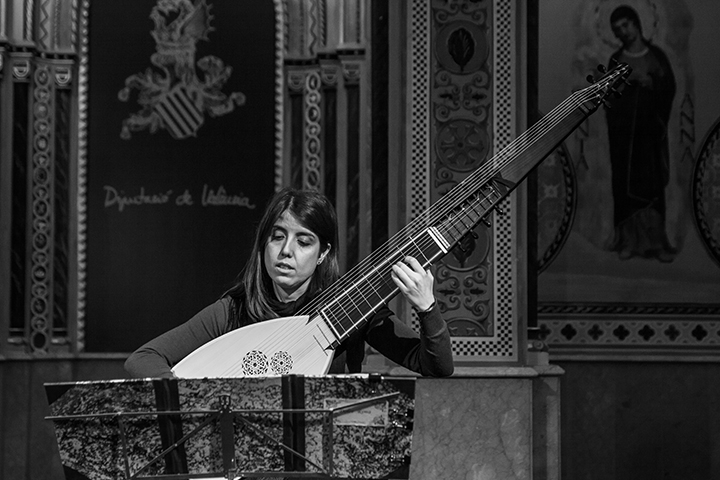 Began studying guitar at the Professional Conservatory of Music of Valencia and graduated at Conservatorio Superior de Musica “Joaquin Rodrigo” of Valencia (Spain) under the tutelage of Jose Lazaro Villena. Interested in early music, she began to study vihuela with Andreas Martin in Barcelona. Later she left for Seville to study Plucked Instruments of the Renaissance and Baroque with Juan Carlos Rivera, where she is currently completing the Advanced Level in the Conservatory of Music “Manuel Castillo”.

She is a member of various groups, such as “Ottava Rima”, dedicated to the early Baroque, led by Alonso Salas (Sevilla), the trio “Nova Glossa”, specializing in repertoire of the Spanish Renaissance, “La Terza Lacrima” and “Dolce Rima” with the soprano Julieta Viñas Arjona.

Along with her partner Julieta Viñas Arjona, she has been responsible for selecting and interpreting the music for the soundtrack of the film “ Anima” of Cuban film-maker Bebé Pérez.

Her participation in festivals, such as the “Festival of Spanish Music of Cadiz 2001”, the “Conference of Renaissance and Baroque Music Arias Montano in Alájar (Huelva) 2009 “, the “Muestra de Música Antigua Castillo de Aracena 2011, the “Ciclo Música Antiga” at the University of Valencia, and FEMAS (International Early Music Festival of Seville) in 2011 and 2012, is noteworthy.